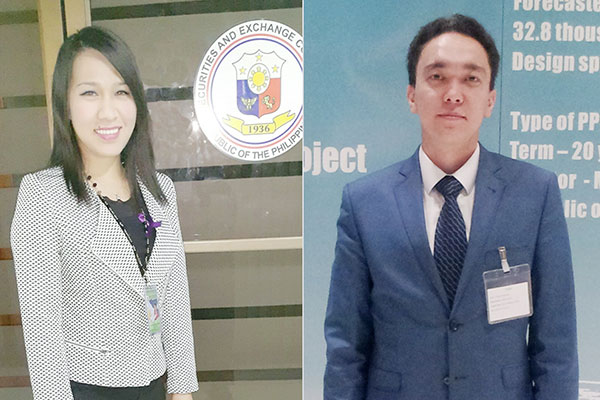 It has been one full year since the first group of KOICA-KAIST Scholarship Students completed their coursework at KGSF. In remembrance of the first group, we have asked two of our alumni to share their experiences at KAIST and KOREA. (Photos were taken at their workplaces)

Ms. Geraldine Chiva Pama (2012) was one of the two female scholars of the group and had a background in law. She set a great example for the group by quickly adapting to the new life in Korea and overcoming challenges as a Finance MBA student.

♡ Some may disagree with my prefatory statement but that was exactly what happened to me. My degree from KAIST opened new and wider perspectives for me, personally and professionally. As of this writing, it has been 1 year and 1 month since I graduated with the degree in Finance MBA at KAIST Business School, Seoul, Korea on February 22, 2014 and 11 months since I left Korea on April 2, 2014 …yet the memories still linger. (click here to see full article)

Mr. Nurlan Shokbarbayev (2012) has a background in state and local management and was more familiar with Korea when admitted to KAIST. He was the “navigator” of the group. He always had answers to questions about living and studying at KAIST. His openness to different cultures, new settings and people made him the real leader of the group.

♡ I’ve spent pretty nice 19 months starting from August, 2012 in Korea and I think it was the best time I’ve ever spent abroad. KAIST and Korea gave me more than just MBA degree. I’ve received more knowledge beside school. Life in Korea has it’s own uniqueness. Such culture things and habits like respect for older person, patience and at the same time «palli-palli» (빨리빨리) style makes Korea very interesting and attractive country to live and spend time here. (click here to see the full article)