This paper introduces a unified approach for modeling high-frequency financial data that can accommodate both the continuous-time jump?diffusion and discrete-time realized GARCH model by embedding the discrete realized GARCH structure in the continuous instantaneous volatility process. The key feature of the proposed model is that the corresponding conditional daily integrated volatility adopts an autoregressive structure, where both integrated volatility and jump variation serve as innovations. We name it as the realized GARCH-Ito model. Given the autoregressive structure in the conditional daily integrated volatility, we propose a quasi-likelihood function for parameter estimation and establish its asymptotic properties. To improve the parameter estimation, we propose a joint quasi-likelihood function that is built on the marriage of daily integrated volatility estimated by high-frequency data and nonparametric volatility estimator obtained from option data. We conduct a simulation study to check the finite sample performance of the proposed methodologies and an empirical study with the S&P500 stock index and option data.

When Does Regulation Distort Costs? Lessons from Fuel Procurement in US Electricity Generation: Comment

We revisit one of the results in Cicala (2015) and show that the previously estimated large and significant effects of US electricity restructuring on fuel procurement are not robust to the presence of outliers. Using methodologies from the robust statistics literature, we estimate the effect to be less than one-half of the previous estimate and not statistically different from zero. The robust methodology also identifies as outliers the plants owned by a single company whose coal contracts were renegotiated before discussions about restructuring even started. 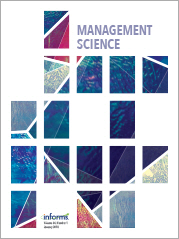 Linguistics research shows that languages differ as to how they differentiate future from present events. Economics research finds that when the grammatical structure of a language disassociates the future from the present, speakers of the language also disassociate the future from the present in their behaviors. This study examines how linguistically induced time perception relates to cross-country variation in investment efficiency. We find that underinvestment is less prevalent in countries where there is a weaker time disassociation in the language. The results from both a within-country analysis based on firms headquartered in different regions of Switzerland and an analysis based on the birthplace information of U.S. firms’ chief executive officers confirm the relation between languages and investment efficiency. Collectively, the results suggest that time encoding in languages influences speakers’ cognition and their investment decisions.

The Effect of Monetary Policy on Bank Wholesale Funding